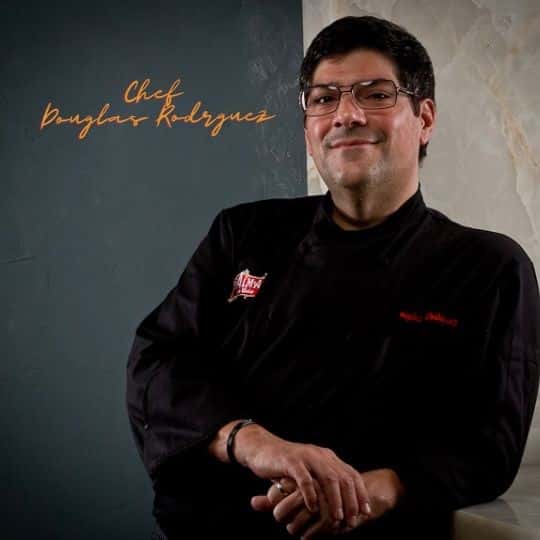 In honor of Hispanic Heritage Month, we had the privilege of sitting down with the Godfather of Nuevo Cuisine himself, Chef Douglas Rodriguez. Chef Rodriguez's culinary creativity has changed the image of Latino food in America. His work has inspired young chefs across the globe.

Son of Cuban immigrants, Doug grew up with the sights, smells, and tastes of Cuban/American cuisine and developed a passion for food early on. By the age of 13, he had a collection of cookbooks, pots, and pans, and was developing and preparing original concepts. At 14, he landed his first restaurant job as a summer apprentice at The Four Ambassadors Hotel in Miami.

After graduating from the esteemed Johnson and Wales University in Providence, he returned to Miami to continue his career. By age 24, Chef Rodriguez was a celebrated chef, winning the "Chef of the Year, Miami" award from The Chefs of America and received his first and second "Rising Chef of the Year" nominations by The James Beard Foundation. Doug headed for New York City where he became the executive chef and co-owner of the phenomenally successful Patria NYC. Patria became the laboratory for his signature Nuevo Latino Cuisine. Quickly collecting accolades from top publications including NY Times, New Yorker, and Gourmet Magazine, Chef Rodriguez opened New York hot spots Chicama and Pipa and joined forces with restaurateur Stephen Starr.

Chef Rodriguez has been featured in a myriad of national publications including Food and Wine, Metropolitan Home, Esquire, and Bon Appetite. He has made numerous television appearances including The Late Show with David Letterman, Good Morning America, The Today Show, and CBS Weekend This Morning. Doug is the recipient of the Lifetime Achievement Award from Flavors of Passion Awards and has authored NY Times best-selling cookbooks Nuevo Latino, Latin Ladles, Latin Flavors on the Grill, and The Great Ceviche Book. If you love Doug's cooking as much as we do, you will be thrilled to learn he has just signed a 4-book deal with a major publishing company.

Thank you for taking the time to chat with us today. You are a culinary innovator who brought your signature Nuevo Latino Cuisine to trendy restaurants in NY, Miami, Philadelphia, and now Tampa. Tell us- how did it all begin?

It was a dream, I used to dream of being a Chef, and watching Julia Child as a kid instead of cartoons inspired me to be who I'm today. Most important The first dish that inspired me to cook was French Onion Soup and I love it so much and I need it to learn how to make it, this was before the internet. Went to a library and got a cookbook for the recipe and my mom bought the ingredients and the ceramic bowls. After that nonstop.

Can you share with us about your latest project?

My latest project is the most fun I ever had, I'm creating and developing dishes and new concepts. It's every Chef who would wish to do create.

What have been your key drivers to success?

Passion, Leadership, Handwork, Perseverance, and Determination, and failures keep me reaching for my goals.

What values and cultural traditions do you adhere to in your life, both personally and professionally?

A Culture is nothing without value. My Hispanic heritage is a big influence on my food, my family, celebrating the holidays, for me, Thanksgiving and Noche Buena with The Roasted Pig, are the most important holidays, it's all about family reunions, food, and traditions.

Can you share with us some of the lessons you have learned throughout your career that you would like to pass along to aspiring Hispanic / Latino professionals in the restaurant/ foodservice industry?

History repeats itself every 20 years. There's always a life-changing catastrophe event but living through 9–11 and now Covid -19 pandemic has been hardest for us. It shifted the industry, but this teaches us we need to evolve, and we are 2021 and we must learn and adjust to the new changes and generations.

What is needed to support young aspiring Hispanic / Latino professionals? What can we do to help?

I have always been supportive of the young aspiring Chefs especially Hispanic/Latino professionals and dedicated my time to mentor them and inspired them to continue. I think reaching out to culinary programs and recruit young talents.

Many professional chefs across the US credit you for the start of their careers. Can you share with us a piece of advice a mentor gave to you early on that still resonates with you today?

Passion, always a PASSION. Unfortunately, early in my career I had no mentors, but later in my profession, I had the opportunity to be inspired and became my mentor Felipe Rojas Lombardi, his book was my bible The Art of South American Cooking even though I never met him. Another inspiring Chef was my friend and mentor Jean Louis Paladin. I got the opportunity to cook, travel and enjoy meals with him.